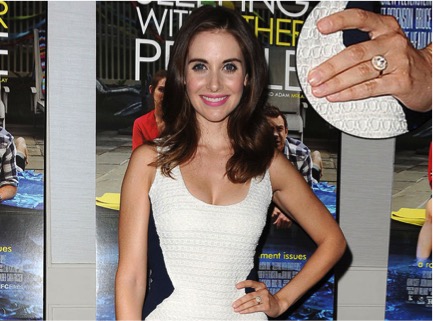 Actress Alison Brie, 32, was seen sporting a gorgeous engagement ring at the premiere screening of her newest movie, “Sleeping With Other People.” Brie’s reps exclusively confirmed the exciting update with different news sources such as E! News and USA Today.

Although there are no further details on their engagement, it may be a shock to many that they were dating at all. The couple has kept a very low profile on their relationship; they’ve been together since January of 2012! They have a few photos together and have managed to stay out of the spotlight—a daunting task in Hollywood.

They did release a NSFW, or not safe for work, short film in 2013 together called “Dream Girl” and were spotted together at the Dior Homme Fashion Show in June of this year.

Ironically, right before she got with actor Franco, 30, Brie was reported saying that she does not even see herself getting married, unless the right man came along. The large dazzler on her finger tells us that Franco swept her right off her feet.

Congratulations to the happy couple!