Although Diamond Engagement Rings are still as popular as ever, many couples nowadays opt for alternatives that are more reflective of their unique values, character, and budget.

Sometimes, when dreaming of that perfect engagement ring, it’s hard not to imagine a flawless shiny white diamond as the focal point.

If you’re dead set on the clear traditional look of the diamond but with a special quality to it, and without having to compromise on ethics, beauty, quality, or finances… then Moissanite might just be the stone for you!

A bold contemporary twist on a vintage bypass ring 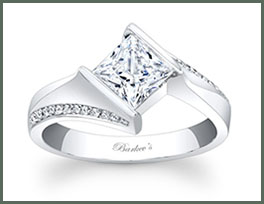 Born from the Heavens. Created by Science.

Sometimes called Stardust or Space Diamond, Moissanite is a gemstone that literally fell from the sky; no wonder it is probably the world’s most scintillating gemstone.

Moissanite is a gemstone that had its beginnings in the stars, when some 50,000 ago a meteorite crashed in Arizona, leaving a handful of crystal fragments in its wake.

When in 1893, microscopic particles of this sparkly gem were first discovered in the crater by French scientist Henri Moissan, these radiant stones were mistaken for diamonds.

Due to the gem’s scarce availability, Moissan – who later won the Nobel Prize in Chemistry – focused his work later in life in trying to recreate this mesmerizing mineral. After his death, it was renamed moissanite to honor his work and contributions. To this day, natural moissanite, remains very rare to find.

After many years of trial and error, the particles Moissan discovered were successfully synthesized to produce what is now one of the world’s most brilliant minerals. But it was not until 1998 that the gem was first introduced to the jewelry market. 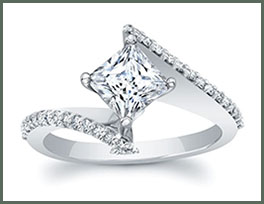 Is Moissanite similar to a “real” Diamond?

It’s an often encountered question if Moissanite is a fake Diamond.

The simple answer is that it is neither a diamond nor a fake diamond and shouldn’t be thought as one; it’s just a completely unique, naturally occurring or lab-grown stone.

The lustrous Moissanite is a beautiful and uniquely precious gemstone in its own right.

Chemically, moissanite (composed of Silicon Carbide) is absolutely different from a diamond; however, it is very similar in appearance and quality to a diamond. In fact, in terms of optics, a moissanite even out-performs a diamond!

Just for the record, most people (including any nosy but well-meaning friends and family members) won’t know the difference between a moissanite and a diamond. Unless you have the two side by side, under proper light, and you’re dealing with an extremely keen observer, they won’t know any better. Even so, the only distinguishable difference to the naked eye is that moissanite has more rainbow sparkles.

We would, however, encourage you to prance your gorgeously shimmering moissanite around, as the unique gem it is, for its very own particular qualities.

A graceful twist with additional sparkle

This delicate modern white gold diamond engagement ring features a kite-set princess cut moissanite center with a shimmer of diamonds on the shoulders. The ring’s graceful open twist shoulders, sweep up from the shank to create the prongs that securely hold the center. The opposing twists of the shank are adorned with shared-prong set diamonds for a subtle sparkle that will draw the eye. 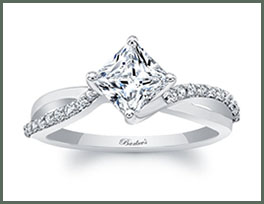 The uncompromising qualities of the Moissanite

Choosing to go with a non-traditional center stone shouldn’t mean having to compromise on quality, beauty, cost, or durability. 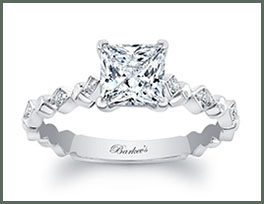 A striking design, this brilliant white gold ring features a princess cut moissanite center stone on a traditional setting. The ring is further enhanced through the shank design, boasting alternating rhomboid and circular designs with an additional diamond decoration, for that bit of extra brilliance!

If you are on the hunt for that unique engagement ring that captures each fragment of your love and commitment within its gleaming beauty, the moissanite can be just as timeless as a diamond, as long as it resonates with you and your loved one.

Gleaming, gorgeous and affordable, moissanite engagement ring is an uncompromising substitute of the traditional diamond. An environmentally friendly, hand polished gem, that fell straight from the heavens.

A cascade of sapphires & diamonds with a moissanite centre

This exquisite sapphire and diamond engagement ring features a white gold cathedral shank, with a prong set round moissanite center. Marquise cut diamonds adorn each side, while small round blue sapphires artfully cascade down the shoulders. 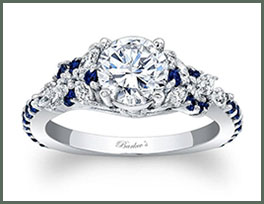 A perfect piece of jewelry as eternal as the stars themselves.