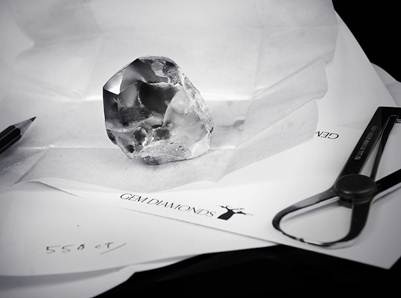 Gem Diamonds sold the 550-carat Letšeng Star rough diamond for $16.5 million, according to news reports on Monday, October 24, 2011. In addition to the lump sum profit, the seller will receive a share of the profit from the D color gem once it is polished and cut.

”The Letšeng Star has the potential to yield an exceptional polished product and the profit sharing arrangement for the polished margin of the Letšeng Star will ensure that its true value is realized and that Letšeng Diamonds benefits directly from the exposure to the resulting upside,” said Clifford Elphick, Gem Diamonds’ chief executive.

The Letšeng Star was found on August 19, 2011, at Gem Diamonds’ Letšeng mine in the country of Lesotho, in Southern Africa. The gem is a Type IIa, D colour, white diamond and is ranked as the 14th largest white diamond on record.

Letšeng mine has made a name for itself in the diamond industry, producing some of the largest diamonds found in recent years. In addition to the Letšeng Star, the mine has yielded the Lesotho Promise, a 603 carat white diamond discovered in October 2006. The Promise is the largest diamond found in this century and is rated D in color.

Letšeng mine is owned by Gem Diamonds, Ltd., a British-based diamond mining business, and the government of Lesotho. Gem Diamonds was founded in 2005.