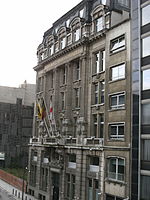 Before diamonds reach your ears and engagement rings, they pass through diamond centers for grading. The centers are located in many of the world’s top cities, such as New York, London, Mumbai and Tel Aviv. Antwerp has been at the forefront of the diamond industry since the 14th century and is internationally recognized as the world’s leading diamond grading center.

For more than three centuries, London has been a major distribution center for rough diamonds. Hatton Garden, a street in Central London, is known across the globe as one of the finest jewelry centers in Europe. The street is lined with 300 diamond companies and 55 shops, which combine to make up the largest concentration of jewelry retailers in the United Kingdom. The shops offer everything from classic styles to one-of-a-kind pieces from the world’s top designers.

Tel Aviv, Israel, is among the most technologically advanced diamond cutting facilities in the world. Nearly $4 billion worth of fancy cut diamonds are exported from the city each year, the majority of which go to U.S. markets. Israel’s diamond center is located approximately 10 minutes outside of Tel Aviv in Ramut Gan. The Israel Diamond Exchange is comprised of four towering buildings that contain 1,200 diamond companies and the world’s largest diamond trading floor.

Mumbai, India, is a major exporter of diamonds due to its high-quality diamonds at more reasonable prices. India’s diamonds are produced in Surat and sold by thousands of diamond retailers that line the streets of Mumbai.