Uncategorized The 3 Most Famous Diamonds in the World

All diamonds symbolize elegant beauty, but some go above and beyond to adorn royalty, inspire conspiracy and make a lasting impression on the world. From the world’s largest diamond to the crowning jewels of royalty, here are three of the most memorable diamonds the world has ever seen: 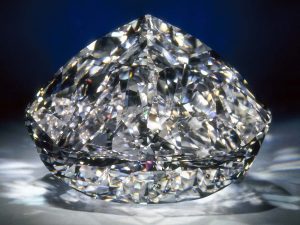 The Centenary Diamond, weighing in at 273.85 carats – or 54.77 grams – is renowned not only for its size but also its flawless coloring. The Gemological Institute of America gave the Century Diamond a D in color, which is the highest grade of colorless diamond, meaning it is internally and externally flawless. The gem was discovered in the Premier Mine in South Africa on July 17, 1986, and was given its name after it was presented in the rough for the Centennial Celebration of De Beers Consolidated Mines on May 11, 1988. The Centenary Diamond was unveiled in its final form in May 1991, with 247 facets: 164 on the pavilion and crown, and 83 on the girdle. The gem was never publicly appraised for value but it was insured for more than $100 million at the time of its unveiling in 1991.

The Golden Jubilee Diamond is the largest faceted diamond in the world, weighing in at 545.67 carats or 109.13 grams. The royal gem is known for its goldish, brown hue and was called Unnamed Brown until it was presented to the King of Thailand in 1997 for his Golden Jubilee, the 50th anniversary of his coronation. As with the Centenary Diamond, this gem was found in the Premier Mine in South Africa. Gabriel Tolkowsky designed the diamond, which has been blessed by Pope John Paul II in the Vatican, the Supreme Buddhist Patriarch and the Supreme Imam in Thailand. The golden gem now resides in the Royal Thai Palace as part of the crown jewels.

The Great Star of Africa