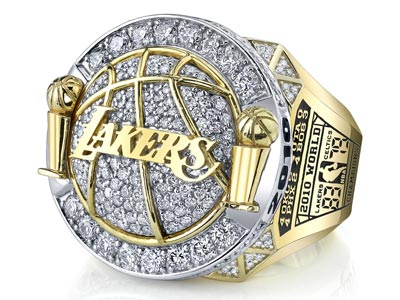 Professional sports championship rings have evolved from understated symbols of athletic prowess to gaudy pieces that put diamond-studded engagement rings to shame. The rings are awarded annually to members of victorious teams in various major sports leagues and the designs are more elaborate as teams try to outdo one another.

The National Football League is the United States’ most popular sport, and the league’s premier event, the Super Bowl, is America’s highest-rated televised event each year.  It’s only appropriate that winners of the country’s most popular sporting events have a ring that is fitting of their accomplishment.  Winners of the first Super Bowl, the Green Bay Packers, were given a one-carat diamond ring that was valued at $750. Fast forward to 2002, and the Tampa Bay Buccaneers’ Super Bowl Ring was a 54-diamond masterpiece valued at an eye-popping $54,000.

The most diamond-studded Super Bowl ring belongs to the 2004 New England Patriots, winners of Super Bowl XXIX. Their ring contains 124 diamonds and weighs more than a quarter of a pound.

Basketball has become the world’s second most popular sport behind soccer. The National Basketball Association is the top professional basketball league. The NBA Finals, played annually in June, is the league’s championship series, and members of the winning team are awarded the coveted championship rings.

The 2010 Los Angeles Lakers have won 16 NBA titles, second only to their bitter rivals, the Boston Celtics. The Lakers defeated the Celtics in the 2010 NBA Finals, and were awarded a stunning championship ring that featured 16-oversized diamonds, which represented each of the team’s championship seasons. The rings also featured a three-dimensional sculpture of each player’s face.

America’s past-time, baseball, has been a prominent fixture in American life since the late-1800s. Major League Baseball has been awarding World Series championship rings since the early 1920s. The most stunning World Series ring to date belongs to the 2010 San Francisco Giants. The ring was the first MLB championship ring designed by the world-famous Tiffany & Co. It features a stunning 18K white-gold band and 77 diamonds that total one-carat of stones.